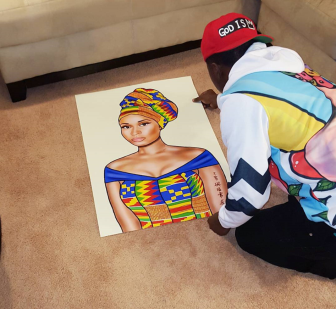 Art classes were the bane of my existence at school. I wasn’t born to paint (which is fine 🙂 and I realized that early on in life (with the help of a mean art teacher!). I’ve always envied those who can tell stories or capture moment with a sculpture or drawing.

I don’t really think of art as synonymous with Africans, and put that down to being raised in Europe where we’re force fed European art. I guess it’s also my fault for not being proactive in searching for African artists too! Academically, art isn’t a subject that is high on the agenda for most African parents in the diaspora or on the continent for that matter. Rarely are African children encouraged to purse their artistic side or made to believe it’s as a viable career choice.

African art and Artists are quite neglected compared to their European or American counterparts. The Foundation for Contemporary Art-Ghana (FCA), is one of its kind in the country, with a mission “to create an active network of artists, offer a platform for the presentation of contemporary art, and to develop a critical forum for the promotion of contemporary art in Ghana.” The growing collection of ‘Africa/ Africa Diaspora’ section of the resource centre focuses on artists working in Africa and its diaspora. After devastating floods in Ghana’s capital Accra, the FCA is asking for donations to rebuild the foundations headquarters and restore books and other valuables that were destroyed.

The diaspora has showcased it talents in various forms, more recently in portrayal of African-American celebrities wearing African garb, by Dennis Owusu-Ansah which grabbed viral attention on social media.

Dennis was apparently inspired to do the drawings after his friend was ridiculed by people in the street for wearing the traditional Ghanaian kente cloth. Dennis wanted to erase some of the ignorance surrounding an aspect of African culture.

Internationally celebrated Ghanaian artist El Anatsui, who’s sculptures have taken prominent stages in New York and Sydney, is described as ‘reflecting devastation and colonisation’, in his work. Anatsui was winner of the Golden Lion for Lifetime Achievement at the 2015 Venice Biennale.

This year, his work showcased in Sydney, is a celebration of 50 years of work. Comprising drawings, wall and floor installations, as well as woodcarvings incorporating West African adinkra symbols.

Renowned architect, David Adjaye’s structural designs can be found across continents. Born in Tanzania to Ghanaian parents; there’s no doubt his eclectic upbringing has contributed to his architectural prowess.

“By the time I was 14, I had lived in Dar es Salaam, Kampala, Nairobi, Cairo, Beirut, Accra and Jedda, and had quite a complex view of Africa.”

Adjaye Associates has its African headquarters in Accra Ghana, and is focusing on various architectural projects in Africa. David has various creations outside of Africa, including the Stephen Lawrence Centre in London. However, multiple attacks by racist vandals led the Architect to admit his creation was actually a failure.

“Yes, the project has failed. It’s gated, it has security cameras everywhere and it has barbed wire. But that is because of the context we are in now. I hope that in 10 years or in five years this changes.”

Anyone who knows African culture is acutely aware that funerals are a big deal! There is no difference in Ghana, where craftsmanship is expressed throughout Ghanaian life, from the beginning to the end, literally! Who said a coffin was just a box?! Novelty coffins are becoming more and more popular in Ghana.

Creativity never likes being restricted, life experiences and cultures are the basis of any art form, whether it be song, dance, words, paintings or structures. Artists want to be known as just that….Artists.

“I have a genetic relationship to the continent, also a cultural and lived relationship. I now have an office in Ghana and other places [but] I am less interested in the definition than I am in the way I can use it to produce in the world.” David Adjaye, Architect.

Snippets of an African legacy from a colourful perspective